Amazing book! ー”After the Ice”age

Related to my personal study on Paradise in Asia-Sundaland, megalitic site Gunung Padang, amazing great book on the initial civilization after the ice age was written by Prof. Steven Mithen, University of Reading, Oxford, UK.

He visited and covered for research to many continents all over the world except South East Asia, Sundaland. It’s a pity, and it seems that  he didn’t cover good reports of research on this theme in UK, too.

I want to make comments about that, is based on chart of Great Journey of Homo Sapience as below, though I’ve got the news in far away island Java by private e-mail on Book Review of some Japanese News Paper . 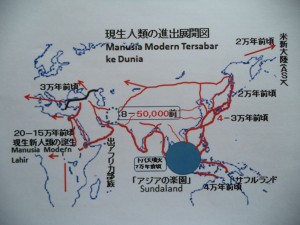 1. It’s written about history of homo sapience from 20,000-5,000 BC .
It’s amazing for me because the theme and the duration are the same as mine and written by a specialist professor on history  has written, not by an amateur as I initially handed over e-book draft of my idea on that theme to e-publisher in June last year.
2. Prof. Mithen wrote on begining of agricuture, but should pay attention to the point that no ice age existed in warm Sundaland and banana is very old selected breed by homo sapience.
3. Yes. In that period, Human Civilization took off far before Mesopotamia though it depends on diffinition of civilization. I’m interested in human characteristic society of large enough, long enough period one which was fully different from that of monkey and ape. When, where and what society was our origin ?
4. Prof. Mithen should study more on Sundaland as he visited almost all over the continents area. He should pay more attention  on it as an important region of Human Great Journey.
5. Yes. Now, we have to think about what human beings are, what human society, civilization should be. People in modern society has to  know about Out of Africa, era of Sundaland “civilization”.
6. Methodology is good. We should study not only from contemporary situation to the past, but from origin of Africa, Great Journey to now.
7. Yes. Results of historical excavation is Evidence. So, I’m interested in Gunung Padang and under water situation in Bay of Thailand.
8. Prof. Mithen has orchestrated many fields of science and picturised initial Human civilization. And it should also be mentioned on analysis of Nenkou, DNA, high-tec electro magnetic survey etc.
9. One Book Review express its greatness as a fine music on Creation of World. But, I think it’s too much. In creation of world, Adam and Eve are black Africans though I don’t know how ordinary Wetern People feel to it. As like they’d got out from the garden of Eden, homo sapience got out of Africa and prevailed to the world.
Now, we should face up to relity of ancient prehistory for one of main issues of ineternational society, humanism.
10. Prof. Mithen touched upon little about Sundaland. It’s a pity, really.
By the way, it’s said by some in study community in Japan that this theme should be discussed not in University but by Rekishinia(retired ordinary seniors who are interested in history) in salon.
But, it’s delightful for me that a  University historian of UK, leading level in the field of history, has finalised contents by scientific method.
I hope more progress will be achieved in this theme near future.